Last year, CLOD ENSEMBLE was invited to create a short performance for the Noh Reimagined Festival. So in February, we went to Japan to understand more about Noh Theatre, a classical form of Japanese musical drama that has been performed for over 650 years.

On Saturday 30 June, we will present a new 20 minute sound piece – Snow. 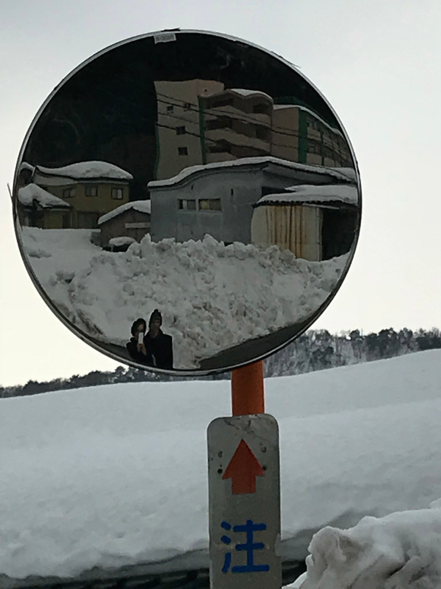 The text – written by Suzy Willson and New York based performer and long-time collaborator Peggy Shaw – is woven into a musical score by Paul Clark – featuring Yukihiro Isso on flute. Snow is not a study of Noh but, as the title of the festival suggests, a re-imagining of something – made with completely different tools, and to completely different effect – an original performance using a musical and poetic language of our own.

Here are some notes and images that we have pulled together that have informed our piece or interested us – points of departure. 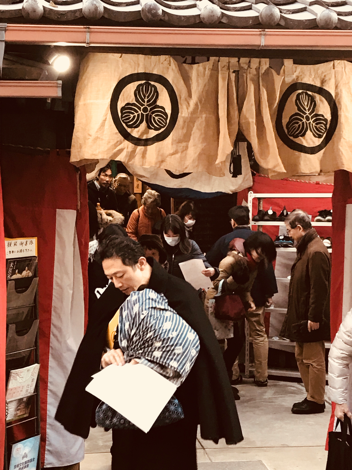 1. Noh theatre is rooted in the symbiotic connection between live music and movement and uses extremely concise poetic text rather than dramatic dialogue. Highly stylized and codified.

2. The tradition is over 650 years old and handed down through generations.

3. There are more than 200 Noh plays which are placed into five categories God Plays, Warrior Plays, Women Plays, Miscellenaous plays and Demon plays.

4. Mugen Noh refers to plays in which the past and present are intertwined. Often there is a spirit looking for absolution, and there is a sense of shame or dishonour about a past event.

5. Zeami Motokiyo (Born 1363) wrote the classic treatise or ‘kadensho’ on Noh called Style and The Flower. 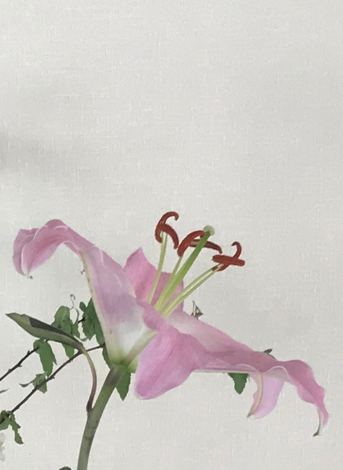 6. Hana (flower) comes in two forms. Individual hana is the beauty of the flower of youth, which passes with time, while “true hana” is the flower of creating and sharing perfect beauty through performance. To develop hana the actor must enter a state of no-mind, or mushin.

“After you master the secrets of all things and exhaust the possibilities of every device, the hana that never vanishes still remains.” Zeami

7. Yūgen is ‘a profound, mysterious sense of the beauty of the universe … and the sad beauty of human suffering”. It is used to refer to Zeami’s interpretation of “refined elegance” in the performance of Noh. Yūgen suggests that which is beyond what can be said, but it is not an allusion to another world. It is about this world, this experience. Something that is felt rather than seen.

Zeami describes various portals to yūgen:
“To watch the sun sink behind a flower clad hill.
To wander on in a huge forest without thought of return.
To stand upon the shore and gaze after a boat that disappears behind distant islands.
To contemplate the flight of wild geese seen and lost among the clouds.
And, subtle shadows of bamboo on bamboo.” 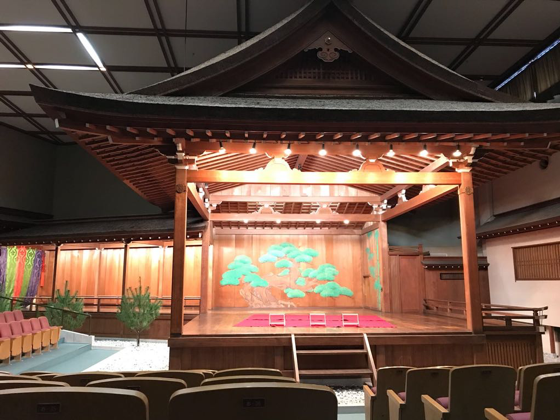 8. The Noh stage is wooden.

9. A pine tree is painted on the back wall and there is a bridge stage right, which the performers walk across to reach the stage.

10. There is a small door stage left through which the chorus enters.

11. Traditionally the theatres were outside and took place in daylight. No stage lighting is used.

12. The performers:
Shi’te (pronounced she’tay) – the leading character. Depending on the play, the shi’te may act as a holy old man, a deity, a demon, a spirit or a living man.
Waki – the supporting actor. The Waki plays roles such as a priest, monk or samurai.
Hayashi – the musicians. Four musicians provide accompaniment for the performance with a flute (fue), shoulder drum (kotsuzumi), hip drum (ōtsuzumi) and stick drum (taiko).
Jiutai – the chorus. The chorus sits to the left of the stage and assists the Shi’te in the narration of the story.
Koken – stage attendants. Dressed in black, the stage attendants are not part of the play but assist the performers in various ways, such as handing them props or adjusting costumes. Koken will jump into understudy a part during a performance if there is an accident as is very bad luck not to finish the play.

13. The performers go to different schools and rarely rehearse together for more than a few hours before a performance – even when they have never performed together before. 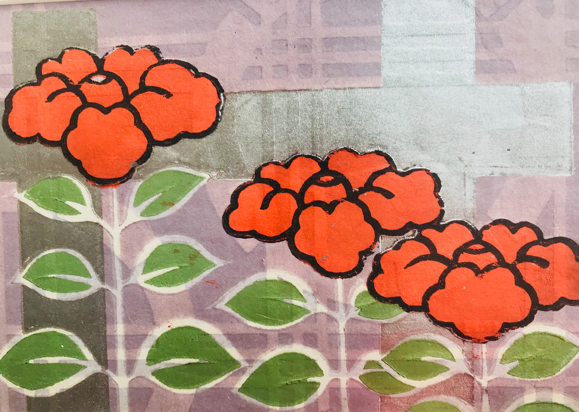 Each performance will only happen once – like a flower that blooms and then passes.

14. A Noh play usually portrays one all-encompassing emotion dominating the main character – jealousy, rage, sorrow, shame, regret. All music, gesture, dance, and recitation are used to build the emotion to its final climax at the close of the play. Often the plays depict the return of a historical personage, in spirit— or “ghostly”— form, to the site of a significant event in his or her life – a battle field, or scene of a love affair. The character cannot find spiritual release even after death if still possessed a strong emotion or desire. To exorcise this emotion, the character might recreate the scene in a dance which reveals his humiliation or suffering.

15. The text is chanted. There are two different styles of chanting – one more intense and less melodious than the other. They have their roots in Buddhist and Shinto chanting traditions.

16. Movement patterns are called kata, the stylistic movement patterns that form the gestural vocabulary and blocking of the dance. Kata means “stamp”, “pattern” or “mold.” Kata support the emotion of the piece; their meaning is created by their context in the dance. 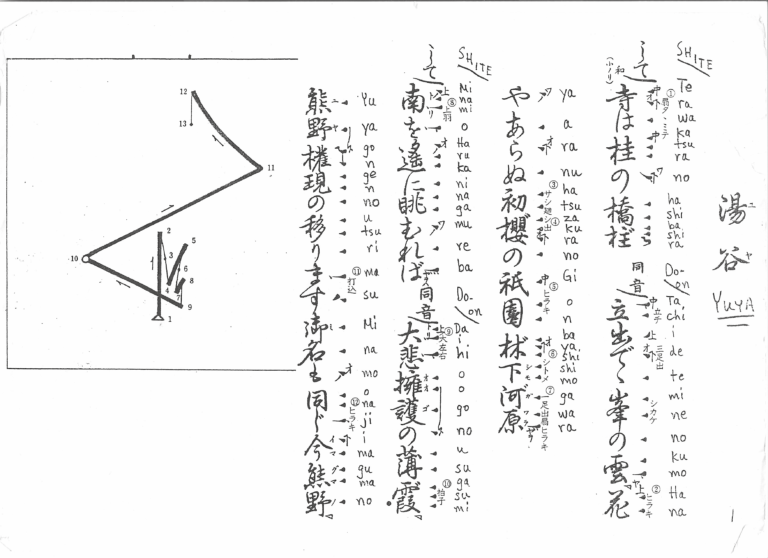 Notation of chant and choreography from our Reboot workshop in May 2018, led by Richard Emmert.

17. Kabu-isshin is the theory that the song (including poetry) and dance are two halves of the same whole, and that the Noh actor strives to perform both with total unity of heart and mind.

18. Most Noh musicians are specialists – they have trained since childhood for this vocation. The music has a huge amount of rhythmic fluidity to it – different beats can be of different lengths – and it is a huge undertaking to master the intricasies of this approach. The rhythm is co-ordinated by the famous ‘calling’ of the percussionists, who respond in real time to the performance of the Shi’te ad Waki.

19. The only pitched instrument is the flute, itself a very unusual instrument which behaves unlike any other wind instrument – each flute is unique, with the placement of holes and length of body custom made. The function of the flute is as much rhythmic as melodic. The fact that there is no standard tuning encourages the player to emphasise the rhythmic aspect of the music rather than repeat well known melodies.

20. Jo-ha-kyū – is a tempo that can be translated as — start slowly, accelerate and end suddenly – used in Japanese arts such as tea ceremony. martial arts and Noh. It’s about expansion and contraction of energy in performance. It happens in the small scale – a physical gesture or a flute phrase that only takes a second or two to complete – or the large scale – the shape of a 90 minute piece.

21. ‘Ma’ refers to a sense of space (this could be visual or musical) or pause. It describes a positive, charged space between things.

22. Performers wear beautifully designed kimonos and carry fans. Closed, partly closed or open, the fan may represent any object as suggested by its shape and handling, for example a dagger or a lantern. 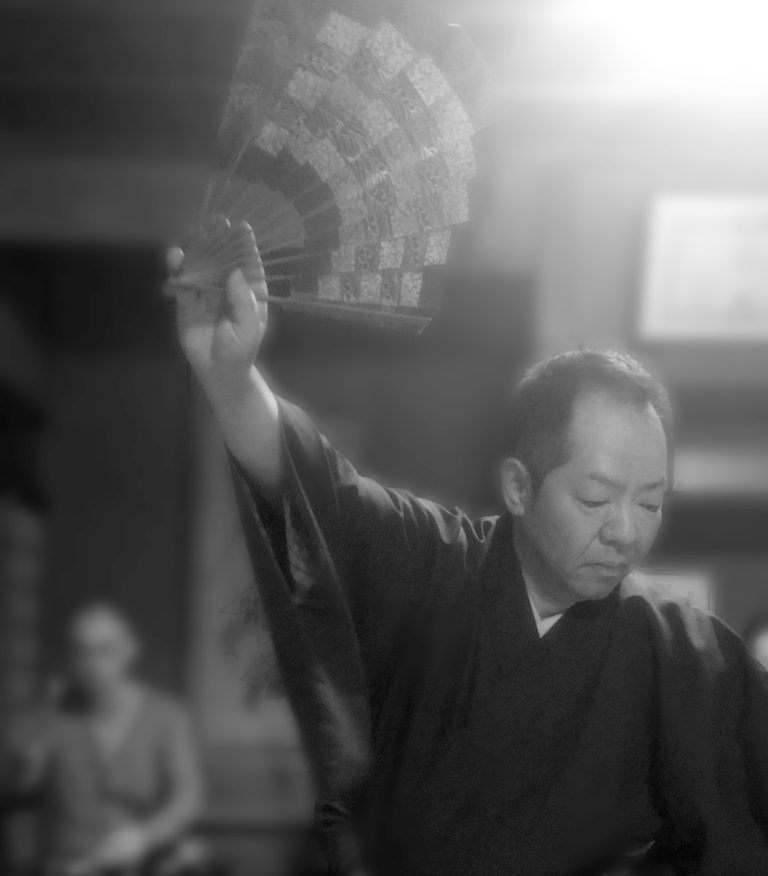 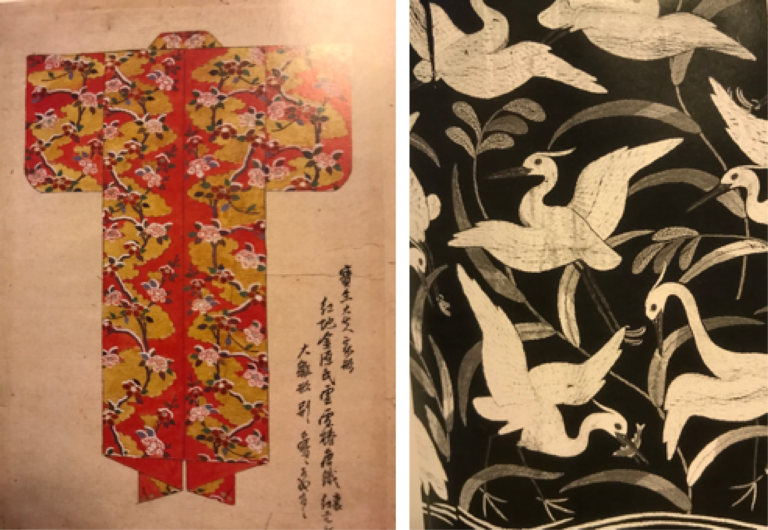 23. There are many different masks. Frequently used masks represent demons and spirits, as well as women and men of various ages. The masks are carved from blocks of Japanese cypress. Their three dimensional properties allow skilled actors to induce a variety of expressions with changes in head orientation 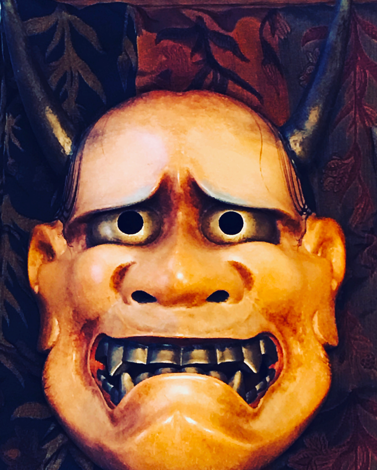 24. There are three levels of demon 1. not completely evil 2. will respond to prayers 3. has embraced jealousy so deeply there is no calming their fury.

25. The photo on the above is of the female demon Hannya.

The mask is carved from a single piece of wood and often finished with very dark coloured paint. The mask is white if representing aristocratic status, red if representing low class and dark if representing a demon. There are three masks expressing the change in female emotions. 1. jealousy, 2. a half way to complete insanity, 3. the saddest – expresses a female gone completely insane and converted into a demon.

26. An actor expresses grief with a simple movement called shiori, lowering the face slightly downward and covering the eyebrows with the hands. 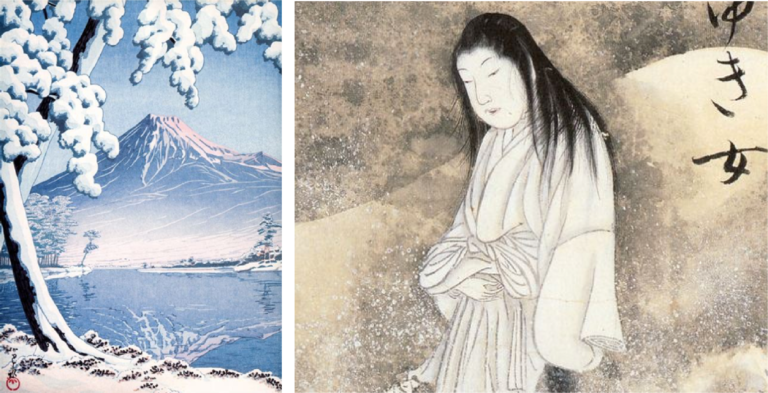 27. Yuki-onna [above right] is a snow demon from Japanese folk tales – usually described as having white skin, a white kimono, and long black hair. She appears in snowfall and glides without feet over the snow like a ghost. She feeds on human essence, and her killing method of choice is to blow on her victims to freeze them to death and then suck out their souls through their mouths.

28. In January 2018, Mount Kusatsu-Shirane erupted which trigged a massive avalanche in Japan.

29. In Kyoto, there is a temple with a thousand golden soldiers. 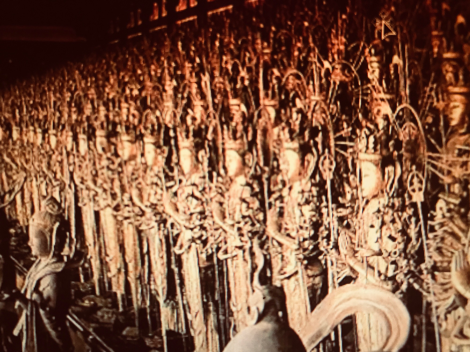 28. Kintsugi – is the Japanese art of repairing broken pottery with lacquer dusted or mixed with powdered gold, silver – golden glue. Breakage and visible repair becomes part the history of an object, rather than a negative trait. 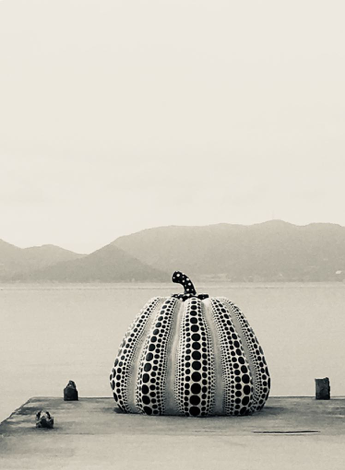 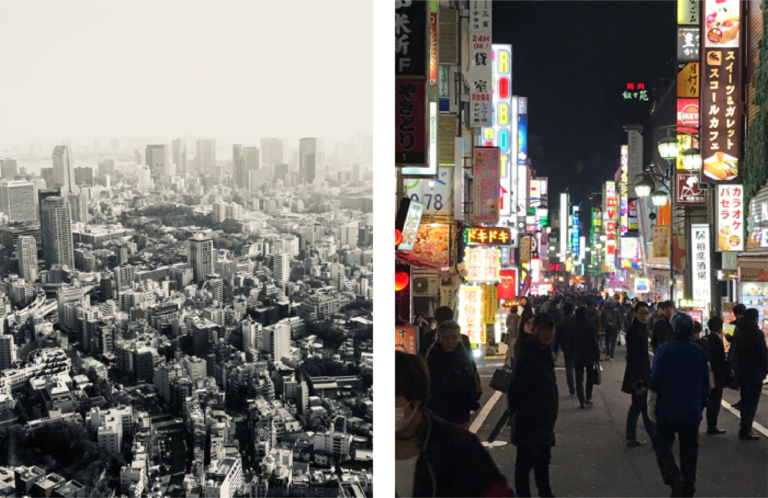 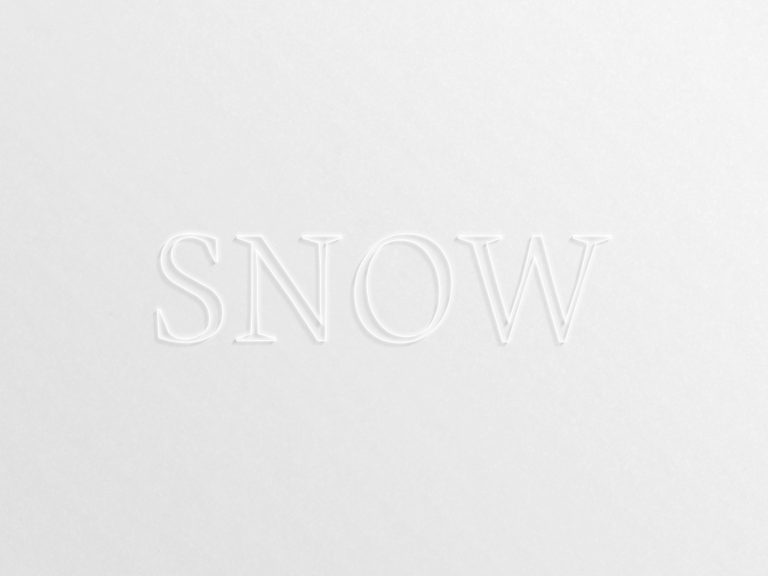 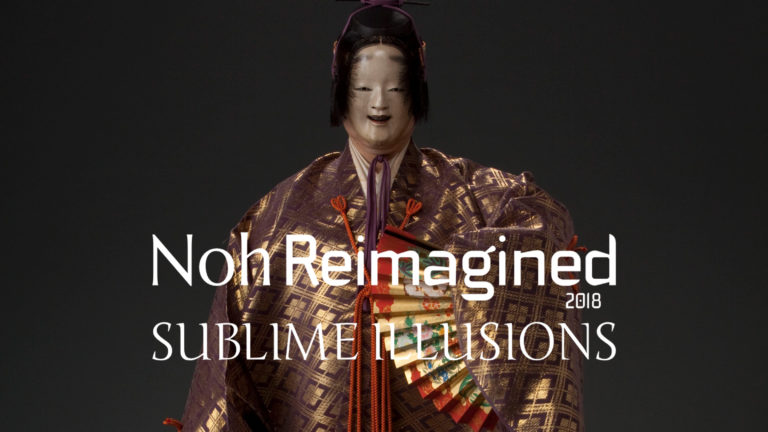